Still interested in running? Entries to the 2022 Bank of America Chicago Marathon are still available through the charity program. Learn more about charity teams.

The Pat Rhodes Award for Outstanding Volunteer Service is awarded annually to a Bank of America Chicago Marathon volunteer who embodies the qualities of dedication, leadership and selfless commitment to the running community. Please join us in congratulating past recipients of this award! 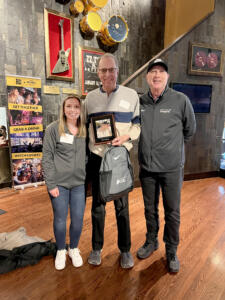 Since 2007, David has been supporting the Bank of America Chicago Marathon as a volunteer. Starting in 2013, David took on additional responsibility beyond a general volunteer role and began his journey as a finish line key volunteer. As a six-time marathoner, David knows the support of the finish line team is critical for everyone completing their 26.2 mile journey on race day. He enjoys congratulating the participants after they’ve crossed the finish line and assisting runners in need. David is always at the finish line with a helping hand! Not only does David show up and make a difference at the finish line, he also recruits additional volunteers to come out and support the event! 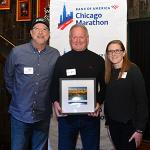 For the past 11 years, Larry Maher has not only volunteered at the Information Booth at the two-day Abbot Health & Fitness Expo, but he has also held down one of the highest-trafficked information tents in Grant Park on race day.  It does not take long for participants to notice that Larry is incredibly friendly and extremely knowledgeable of both Chicago and the event.  Furthermore, he shares these skills with volunteers and treats them with care and appreciation.  Leading up to the event, Larry assists our team to ensure that the information guides provided to volunteers enable them to perform their roles with accuracy and efficiency.  Larry’s expertise and patience enable him to deliver assuredness to participants as they prepare to embark on the Bank of America Chicago Marathon.

Darrell Hale has been a part of the event for many years and was mentored as an aid station co-captain under the leadership of Pat Rhodes.  Following Pat’s death in 2010, Darrell assumed the responsibility of aid station captain and has since maintained the reputation of Aid Station 3 being one of the best organized on the Chicago Marathon course.  Darrell takes his role seriously – he ensures his work travel does not conflict with the date of the marathon, recruits upwards of 300 volunteers from the Calumet Region Striders, holds planning meetings with his key volunteers, and coordinates a caravan of volunteers from northwest Indiana at 3 o’clock race morning.  Not only does Darrell run a smooth operation, he puts extra effort towards safety and is an exceptional volunteer leader. 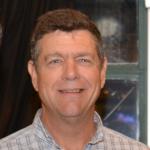 Rich Aycock served as the captain of Aid Station 2 for the 2017 event. In the months leading up to the race, Rich stepped up to run the aid station in place of his friend who had broken his leg. Organizing an aid station is not a small undertaking, but Rich organized the operation and the volunteers with a smile! He truly believes in helping others and putting the needs of others ahead of his own.

Linda Stewart has been involved with the Bank of America Chicago Marathon for 12 years. She dedicates many days to the event by volunteering for packet preparation, the Abbott Health & Fitness Expo, race day, and post-race projects. If something doesn’t go as planned, Linda is ready with a solution in order to ensure that the volunteer program runs as smoothly as possible. Linda interacts with almost every single volunteer, whether it is around the table at packet preparation, at volunteer gear check at the expo, or in volunteer hospitality at Harrison Volunteer Compound. She believes that if she takes good care of the volunteers, the volunteers, in turn, will take good care of the runners. As runners cross the finish line of the Chicago Marathon, Linda feels prideful as she recognizes that the runners would not have such a positive and memorable experience if it weren’t for the volunteers. Linda exemplifies an outstanding volunteer as she reminds us, “Giving back in time is more precious than money.”

Bernard has worked with the Bank of America Chicago Marathon for more than 25 years.

As the captain of Aid Station 19, he recruited over 300 volunteers to support and cheer on runners as they make their way to finish. Bernard’s favorite part about volunteering for the marathon is assisting runners with encouragement and any needed support from South Side residents, athletes, music and fun.

In addition, to his role as aid station captain, Bernard is also an accomplished marathoner and community leader. He has recorded 40 marathon finishes including 9 Boston and 8 Chicago marathons with a personal record of 2:54:22 set in 1985 in Chicago. As executive director of the Tri-Masters Sports Initiative, he has shown more than 1,500 inner-city youth that the world is full of opportunities if you persevere and prepare. These goals are best described in the program’s motto, “Tri and you can master anything in life.” The Bank of America Chicago Marathon staff is grateful for Bernard’s many years of service and leadership throughout the event and the Chicago running community.

David Reithoffer has been involved with the Chicago Marathon for 25 years. As Aid Station 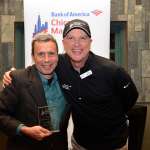 05 Captain he recruits over 100 volunteers to support and cheer on runners as they make their way through Lakeview, one of Chicago’s most vibrant neighborhoods. He was an integral part of the expansion and development of the aid station program. In addition to his role as aid station captain, David also works as a community ambassador for the Bank of America Chicago Marathon. In his role, he helps foster relationships in the Lakeview neighborhood and invites the community to get involved and share his passion for the sport of running. It has been an honor to work with David and see his appreciation and enthusiasm for the Chicago Marathon each year. 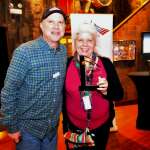 Group Leader and technology teacher at Rowe-Clark Math & Science Academy in Humboldt Park, Donna Nowatzki has brought groups of students to volunteer at the Chicago Marathon for many years. Each year Donna and the Rowe-Clark students volunteer on race day and at the Health & Fitness Expo, making them quite a unique group. From recruiting volunteers and chaperones, communicating event details, coordinating transportation and more, we recognize and appreciate all of Donna’s efforts to get her students involved. Organizing one volunteer group, let alone two is no easy task. More importantly, the Chicago Marathon recognizes Donna’s dedication to her students. All the hard work pays off when she sees her students excel at and take pride in their volunteer work by enthusiastically supporting runners from around the world and showcasing Chicago’s warm hospitality. 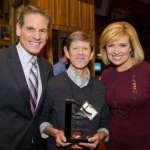 Fifteen-year veteran volunteer Rich Beddome was the proud recipient of the 2012 Bank of America Chicago Marathon’s Pat Rhodes Award for Outstanding Volunteer Service. As the Captain of Aid Station 16 near Mile 21, Rich and his team of volunteers enthusiastically supported participants as they try to break through “the wall,” making sure they were hydrated for the push through the final miles. Behind the scenes Rich selflessly dedicated time to the elite athlete transportation team, recruiting Start Corral volunteers, helping at the Expo, and his primary role as Aid Station 16 Captain. Surprised and honored to be recognized as the third recipient of the Pat Rhodes Award, Rich was amazed and humbled by the dedication of the thousands of people who make volunteering at the Chicago Marathon an annual tradition. 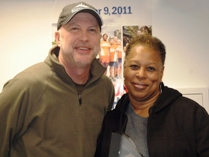 Shirley first began volunteering at the Chicago Marathon over a decade ago. From her first volunteer assignment at the Health and Fitness Expo, she was hooked. She said, “It was so exciting that I stayed until closing that night.” Since then Shirley has continued her commitment to the Expo while also coordinating a group of volunteers on race day. Her group from the Illinois School Psychologist Association has worked at the hospitality tents, with event VIPs and even on the finish line. Shirley also fills another key role on race day, arriving well before the sun rises to help check-in thousands of volunteers in Grant Park. Shirley is kind to all and always maintains a positive attitude. She truly embodies the spirit of volunteerism, and we are proud to honor her with this award. 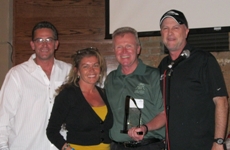 The 2010 winner and the first recipient of this award is Aid Station Captain Pat Onines. From the Alpine Runners, Pat has served as an Aid Station Captain for 22 years, and he is an integral part of the Chicago Marathon team. He is also an involved member of the running community, dedicated to enriching the lives of runners and volunteers. When asked what his favorite part about volunteering for the marathon is, Pat said, “The honor of being an integral contributor to one of the best organized marathons in the world. It’s really a rush when it all comes together and I love it!” It is our great honor to present him with the first Pat Rhodes Award for Outstanding Volunteer Service.