Charity entries: Charity entries are still available for the 2023 Bank of America Chicago Marathon. Visit the Charity Index for a full list of organizations with entries.

Lend Your Hands, Save a Life Award

The Lend Your Hands, Save a Life Award was established by Medical Director George Chiampas, D.O. to recognize a member of the medical program who demonstrates extraordinary commitment to participant safety, contributes innovative medical processes that enhance participant safety and experience, or who goes above and beyond the call of duty to have a positive impact on participants. 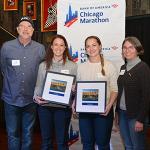 Ann Phelps, a Physical Therapist from Athletico, and Kelsey Keener, a student of physical therapy at Northwestern Memorial Hospital, went above and beyond to support a runner who presented with troubling hip pain on race day.  Both volunteers decided to accompany the runner to Laflin Medical Tent, where it was determined that the runner had a stress fracture and would not be able to finish the race.  Ann and Kelsey then accompanied their patient to Balbo Medical Tent, and ultimately in an ambulance to the hospital.  In choosing to accompany the runner every step of the way through our medical program, Ann and Kelsey went above and beyond the call of duty to attend the physical and emotional needs of a participant whose race was cut short.

The 2018 recipient of the Lend Your Hands, Save a Life Award is Dr. Andrew Cunningham, a resident through the McGaw Medical Center at Northwestern University.  On race day, Dr. Cunningham personally accompanied a critically ill participant in an ambulance to a local hospital, monitoring the patient and intervening during the trip to stabilize her health and save her life. An active volunteer in medical programs at Northwestern and in Chicago, Dr. Cunningham has volunteered for the Bank of America Chicago Marathon Medical Program since 2016.  Other volunteer efforts include serving as a CPR instructor for the Chicago Cardiac Arrest Resuscitation Education Service, as a volunteer instructor for various simulation courses for the Northwestern University Feinberg School of Medicine, and as a volunteer member of the Northwestern Emergency Medicine Wellness Committee.  Among his colleagues, Dr. Cunningham is recognized as an outstanding physician and educator who has contributed to the residency program, the medical school and the local community over the years. 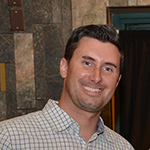 Eric McQuaid has been a medical volunteer for the Bank of America Chicago Marathon and Bank of America Shamrock Shuffle for eight years. More recently, Eric was tapped as a key lead for the Medical Response Team. In this position, one of his primary goals was volunteer training and to shorten the learning curve for new volunteers. In addition to the creation of many educational materials, Eric initiated a mock marathon event to train hundreds of event volunteers from numerous universities and hospitals. This training helps to give medical volunteers the opportunity to practice their triage and emergency communication system, better preparing them for their race day role.

Over the years that Andrew has worked with the marathon, he has shifted from being a volunteer who learned what his volunteer assignment was when he showed up on race day, to developing and managing Medical Response for the Medical Program. Andrew developed Medical Response with two goals in mind: to respond to the increased likelihood of runner collapse in the last half mile of the marathon course; and to proactively place volunteers in roles that correspond to their skills and training so that they feel more effective and engaged in their volunteer work, thus encouraging people to return year after year. When asked what gives him the most satisfaction about working with the marathon, Andrew stated that it is working with a program leadership that seeks to capitalize on individual volunteer strengths, encourages volunteers to take ownership of the service they provide on race day, and that is able to make “constructive changes and decisions in real-time” as the needs of the course, the runners, or the event evolve and change. On a more personal level, he loves to see how his former students come back year after year (some even flying in during the busiest part of the athletic season) to volunteer on race weekend and to see them take up leadership roles that move the Medical Response Program forward in innovative ways. “[The program] is organically growing, and I just sit back and smile as I see alums come in and take the reins.”