The Legacy Award was introduced in 2017 in honor of the event’s 40th anniversary. In 2022, the award was renamed in honor of Howard Sagett, a foundational member of our events and unwavering supporter of the Chicago running community. The award will be presented annually to recognize an individual who has and continues to go above and beyond to support the event, has a longstanding relationship with the race and has truly helped to make the event the world-class race that it is today. 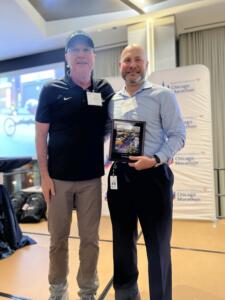 This year’s recipient embodies the dedication and commitment shown by Howard Sagett. He has been supporting our events since 1989, when he volunteered as a lead vehicle driver. He continued his involvement in the industry through electronic race timing and began course measurement with our events in 2007. He’s a USATF and World Athletics official and is recognized as one of the industry’s most respected course certification officials. In addition to his work pre-race, he oversees the coordination of the lead vehicle procession race weekend, allowing the world to see Chicago’s flat and fast course. We are incredibly grateful for his continued contributions and look forward to working with her for many years to come. 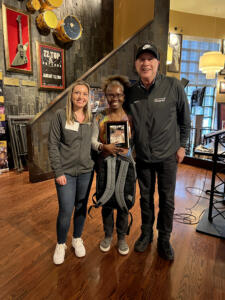 For over 10 years, Lillie Council has been supporting the Bank of America Chicago marathon as a key volunteer. When she was younger, she had a career in the U.S. Army and was stationed in several locations around the globe. Her philosophy is, “Get it done, with a smile!” and she brings that saying to life with her work at the Abbott Health & Fitness Expo. Lille’s management of the t-shirt distribution at the Expo ensures that thousands of participant shirts are correctly distributed to our participants in a fun and efficient manner. Throughout the years, as our event plans adjust, Lillie has adapted and is always looking for ways to streamline improve efficiency for other volunteers and participants! 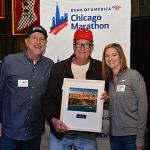 Steve Sawyer is a familiar face at running events in and around the Chicago area. Steve has been with the event for more than 20 years and has helped shape the gear check and start hydration services into the well-oiled machines they are today. As a longtime runner, he realizes the value in a positive race day experience and is willing to go the extra mile to ensure each runner starts their day off on the right foot and is connected with their personal items following the race. Rarely do we hear of lines at gear check or a lost bag, and that is thanks to Steve’s organization and leadership. On top of that, he also supports the event at the Abbott Health & Fitness Expo assisting with t-shirt inventory and logistics. He has built lasting relationships with staff and key volunteers who we see return event-after-event and manages volunteers with appreciation and enthusiasm.

The 2018 recipient of the Legacy Award is Rich Guidice, the First Deputy Director of the Office of Emergency Management and Communications. With nearly three decades of experience in municipal government, Rich has extensive knowledge of the City’s management and operations, and the vibrant and diverse neighborhoods we run through. Rich has played a critical role in the planning and coordination of many large-scale events within the City of Chicago, ensuring the safety and security of event attendees and our city. In addition to playing a critical role in the planning of the marathon, Rich has also supported the 2008 Inauguration Celebration for President Barack Obama in Grant Park, the 2012 NATO Summit, the Stanley Cup Championship parades and rallies for the Chicago Blackhawks and the World Series Championship celebrations of the Chicago White Sox and Chicago Cubs. 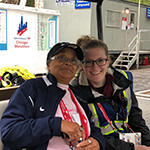 The recipient of the inaugural Legacy Award is Betty Jenkins. Betty is someone who needs little introduction. If you’ve worked the event, you know Miss Betty! Always greeting volunteers with a smile, she does whatever she can to make the event a success. At one time, Betty stuffed more than 40,000 Ziploc bags to ensure that all participants received safety pins for their race bib number. You’ll often hear Betty saying, “If I had to do it over, I’d be right there again.”