Still interested in running? Entries to the 2022 Bank of America Chicago Marathon are still available through the charity program. Learn more about charity teams.

The Gregory Shaskan MD Memorial Award was created in 2010 to honor the memory of former Medical Volunteer Dr. Gregory Shaskan. Dr. Shaskan served as Code Team Medical Captain at the Chicago Marathon from 2007-09. He was committed to the assurance that every participant finished safely. He also served as a mentor for other health care professionals to help them promote healthy living throughout the community. Each year, this award will be given to the Medical Volunteer team member who exemplifies commitment and professionalism. This individual has shown great leadership in the field of marathon medicine and additionally has served as a teacher to those who follow. 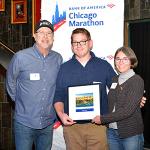 Dan Cronin has been a part of the event for 12 years and has played a critical role in taking the event’s medical logistics to the next level. Dan has presented and implemented ideas to improve medical supply distribution. Now, Dan supports the medical program by overseeing supply distribution for the Balbo Hospitality Tent as well as the rest of our medical facilities in Grant Park and on course. Regarding his contributions, Dan said, “[The event’s] concern for the welfare of the runners is well known, and I consider myself fortunate to have been part of this team. Having this great team behind me makes everything that I have done over the last 12 years that much easier to accomplish.”

David Kleckner has been a critical part of the Bank of America Chicago Marathon for the last 10 years. He came to the event has a part of the ham radio team, and has since applied his professional experience in meteorology to support the race from an emergency preparedness standpoint. In the days and weeks leading up to the Chicago Marathon, David closely examines the weather feeds and patterns to create custom forecasts for the event. His predictive models help to inform our Event Alert System and ensure that everyone is prepared for changing conditions leading up to and during the race. 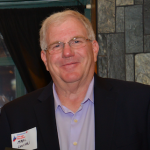 Marc Levison is a lifelong Chicagoan who served 41 years on the Chicago Fire Department Bureau of Emergency Medical Services. In addition to his five years of service to the Bank of America Chicago Marathon, Marc has worked several major city events including coordinating the EMS response for President Barack Obama’s election night celebration in Grant Park.

An Associate Professor of Physical Therapy in the College of Health Science at Midwestern University, Christine has taught students of physical therapy for 18 years and served as a volunteer for the Bank of America Chicago Marathon for 16. She recounts that her first year as a volunteer, she and a team of students were handing out PowerGel to runners along the course in Chinatown. Since then, as the Medical Program has gained organization and direction, her role has evolved so that she now serves on the Bank of America Chicago Marathon Medical Committee as the Physical Therapy Captain and as a Spotter Tower Coordinator on race day. Christine is also active in volunteer recruitment for the event, not only bringing PT students to the event but encouraging professionals to serve as race day supervisors and mentors to those students.

When asked why she started volunteering for the Chicago Marathon Medical Program, Christine answered that she has always done so for her students. She notes that the marathon offers students a unique learning experience that exposes them to physical therapy practice in the context of a well-organized program that has a clear purpose behind it. She particularly appreciates exposing her students to a situation in which volunteers from across the medical professions come together collaboratively to provide high quality medical care in a novel context.

Michael Hovi has been involved with the Chicago Marathon since 1991. He began his tenure in the Bank of America Chicago Marathon medical tent facility in 1993, serving as a supervisor for the Chicago School of Massage Therapy (now the Cortiva Institute). In 2000, Hovi volunteered with The SOMA Institute alongside 15 students to staff the Balbo Medical Tent. Today, Mike coordinates SOMA massage therapy alumni and students in the Balbo Medical Tent, the aid stations along the course, and Balbo Hospitality Tent near the marathon finish line in Grant Park. Hovi has traveled the world as a clinical massage therapist, providing sports massage at major venues including the Broadway Hit “Riverdance” and two separate Olympics. The Bank of America Chicago Marathon is grateful for Hovi’s continued service to the medical program and the athletes throughout Chicago. 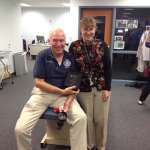 Dr. Mark McKeigue completed the Chicago Marathon four times before becoming involved as a medical volunteer 20 years ago. A physician with Dr. Rife & Associates in Orland Park, IL, Dr. McKeigue’s interests are focused on sports medicine and spinal manipulation. We are proud to have Dr. McKeigue as a leader on the Medical Team for the Bank of America Chicago Marathon and thank him for his many years of service. 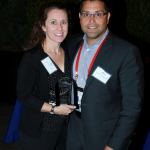 Dr. Jaworski has volunteered her time at the Chicago Marathon for many years and currently serves as the event’s Director of Education and Research. Her hard work and dedication to the event inspired Medical Director, Dr. George Chiampas, to award her with this year’s Gregory Shaskan MD Memorial Award. Dr. Jaworski is currently the Director of Intercollegiate Sports Medicine and Head Team Physician at Northwestern University. She started her education as a student athletic trainer at Northwestern before obtaining a B.S. in Biology from the University of Illinois-Urbana in 1992. She later graduated from Loyola University Stritch School of Medicine in 1996. Her love of sports medicine only grew from there. Dr. Jaworski completed a Sports Medicine Fellowship at Kaiser Permanente in Fontana, Calif., and while on the west coast, she also served as the Team Physician for Cal State San Bernardino and Chaffey Junior College. Dr. Jaworski was later a physician at the 2002 Winter Olympics in Salt Lake City, Utah, and the Ironman World Championships in Kona, Hawaii. 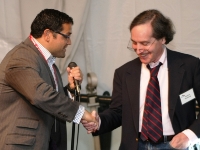 Dr. Weinberg has served as the lead of Podiatric Services at the Chicago Marathon for 21 years. He has also served as the National Speaker on Podiatric Sports Medicine, Race Medical Director for the Chicago Triathlon for 25 years, and Chairman of the Chicago Area Runners Association’s Sports Medicine Committee during the 1980s. Regarding his experience with the Chicago Marathon, Weinberg has said, “I have seen this event evolve into the word class event it is today, and I know that with the current leadership, race organization and medical production team, it will continue to be one of the most popular, well-run races in the world.” We are fortunate to have a leader with such vast experience in this industry, and it is our privilege to honor him with this award.

A Certified Athletic Trainer, Larry has contributed to medical teams at over 500 events since 1977 including the US Olympic Training Center, the Pan Am Games, and of course the Chicago Marathon. Larry has been a dedicated member of the Chicago Marathon Medical Team for 34 years. His role has evolved over the years, and he currently oversees Grant Park Medical Operations and works with the Medical Logistics team. Regarding his experience, he has said, “I am privileged to work with so many outstanding individuals. I’m just a small part of the entire Medical Team who is trying to support an incredible undertaking. It’s an honor to be a part of it.” We are proud to have Lawrence as a leader on our Medical Team and thank him for his many years of service. 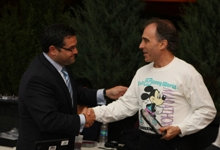 In 2010, we were proud to present this award for the first time to Terry Nicola, MD, MS. Dr. Nicola has served for over 20 years as a medical leader in the trenches at the latter part of the course. He has always demonstrated the highest level of professionalism while providing care to thousands of runners. Additionally, countless health care professionals have seen him as a mentor in their careers. We are proud and fortunate to have Dr. Nicola as a leader of the medical team at the Bank of America Chicago Marathon.